Modelling and optimization of timber structures

A new challenge in design: BIM (Part 1: what is BIM and why we use it)

Almost every time we hear the word ‘efficiency’ used to describe a timber building, it concerns the energetical aspect. One of the most important and interesting aspects of the timber engineering process, however, is the analysis of the material’s structural efficiency, that is the optimization of the strength/production costs ratio.

To this purpose, it is very useful to make use of valid finite elements modelling softwares, especially for composite or particularly complex sections. Using the structural analysis software Dlubal RFEM, we have recently analysed the optimization of a slab composed of glulam beams joined to a CLT plate by means of screws. This experience, which led to a final saving in costs and production timings of about 20%, was exemplary of the real advantages of a bigger investment during the design process.

Example of the modelling of a ‘beam’ element in Dlubal RFEM

Briefly recalling the main stages of the analysis of the structure pictured above, the first step was generating a correct model, both geometrically and mechanically; to this purpose, we: 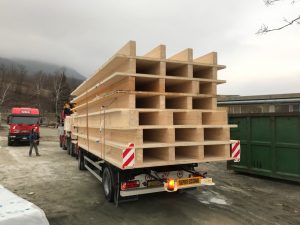 Trasport on site of prefabricated elements

Then the tensile forces perpendicular to the direction of the grain were calculated, in proximity to the circular hole, and the eventual interactions with the saw-cut were evaluated. As regards dimensioning and testing of the reinforcement screws, the software’s indications were graphically and numerically aligned to the regulations (the diagram shows how the stress peaks are concentrated in areas which are rotated circa 45 degrees from the beam’s axis). The optimisation was therefore focused on finding the maximum dimension of the hole and its position in relation to, respectively, the beam’s dimensions and the position of the cut.

Analysis of the distribution of tensile and compressive forces, perpendicular to the direction of the grain, in proximity to the hole and the saw-cut.

Sections on hole and cut, to analyse the diagrams of tensile and compressive forces, perpendicular to the direction of grain

Horizontal section on the hole, to analyse the diagrams of tensile and compressive forces, perpendicular to the direction of grain 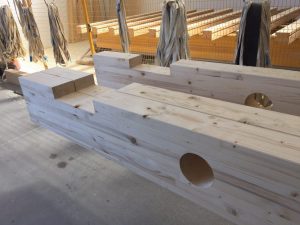 Detail of  machining of a beam:  notches and instalation drills 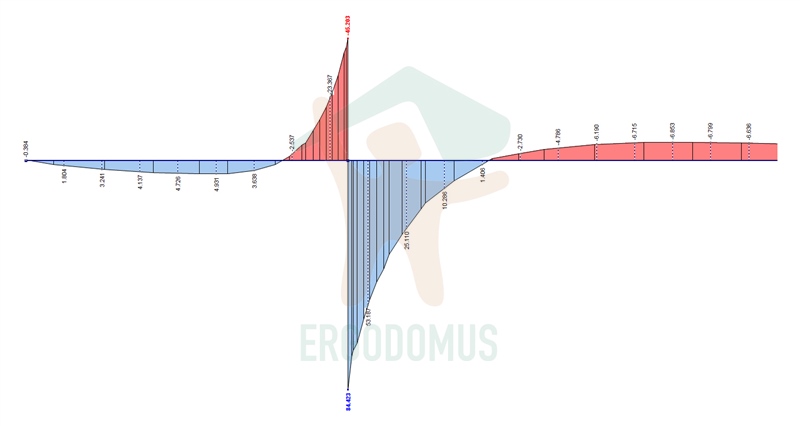 Diagram of tensile and compressive forces affecting the hole, perpendicular to the direction of grain (horizontal section)

The main work focused, then, on the optimisation of connections. They represent one of the elements that most influence this kind of structures, in terms of both mechanical response (they affect the grade of interaction among connected items) and costs (raw materials and construction timing).

Once the connector had been chosen, the target was to calculate the minimum number needed to guarantee the required strength and to follow the strain limits imposed by the regulations. Therefore, we focused on the number of segments to divide the beam in and on the center-to-center distance of the screws in each segment.

At this stage, the software proved itself to be a fundamental resource, for at least three reasons: 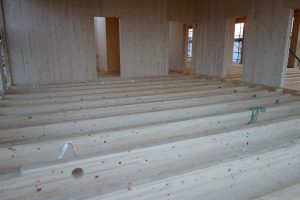 Lying of a slab 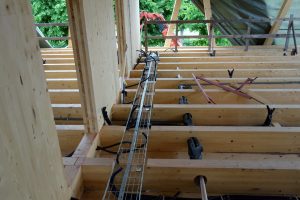 Installation of cables in the slab

Finally, it is important to emphasize that the present paper aims to inform about the advantages of a correct and in-depth design process, and not to promote a blind faith in the modelling software. In fact, although it is a powerful support in design, a software could never take over the designer, that still bears the responsibility to control and critically examine the obtained results.

More details about Dlubal RFEM modelling cases, carried out by Ergodomus, can be found at the following links: