The aim of this project was the renovation of the original headquarters of the historical car body shop Scaglietti of Modena. Ergodomus carried out the engineering of the entire wooden structure.

The old industrial structure, by now incorporated in the center of Modena, has been out of operation for a long time, as could be seen by the roof, most of which had collapsed. The existing building was maintained, since the typological elements of a workshop of the Fifties were still recognizable. All of the external walls will maintain their historical “flavour”. On the inside, an XLAM structure made it possible to create a highly performing building, both statically and energetically, with working times reduced to a minimum, in an area that was hard to access with a traditional building site.  This option proved to be more economical than other solutions (iron, cement, etc.) as well as being flexible and adaptable to customer needs.

The project involves the realization of a two-story building with a dual-pitched roof with variable slope. The building consists of two distinct units. The new structure is completely independent and detached from the pre-existing structure. After several different initial hypotheses, it was decided that the bearing structure would be carried out with portals made up of pillars wedged into the ground, while the bracing between the portals is guaranteed by the XLAM panels of the longitudinal perimetrical  walls and the central partition wall between the two building units. The change in slope of the roof required particularly careful integrated architectural and structural designing, which made it possible to avoid 4 rigid joints on each portal by installing pillars dimensioned in such a way as to satisfy the structural bracing function on the plane of the portal and the supporting function for the roof strut, in harmony with the architectural design for proper distribution of the spaces.

Ergodomus was in charge of the engineering project starting from an architectural project developed by the Fabbricart Studio of architects Gabriele Marasmi and Alessandro Migliori located in Modena (MO). The original project was not designed from the beginning for the use of wood, so reaching a solution able to meet the specific requirements of all the parties involved – architects, engineers, installers and of course the final customer – required close interaction between the studios .  The engineering process was carried out internally at Ergodomus and thus it was possible to reduce the amount of wood employed as well as the installation times (only 7 days for the installation of the entire structure), and consequently the costs, while maintaining the esthetical and functional properties of the work and guaranteeing static safety. Finally, Ergodomus also created a 3D construction drawing using special software and implemented the programming of the CNC machines, the factory pre-assembly plans and the on-site assembly plans.

Dlubal RFEM software was used to carry out the analysis of the finished elements of the structural model by replicating the real connections utilized; in fact, the joints of the wood construction, consisting of cylindrical connectors, cannot be considered as infinitely rigid, but as elastic and deformable elements in all respects. The constraints between the various elements were modeled with a spring representing the actual mechanical behavior of the connections installed.

In order to define each type of connection, a 3D model was created using a special software, hsbCAD, with the exact position of each structural element on which all the necessary processing for the production and assembly of the wooden structure was modeled. This made it possible to achieve maximum control and optimization of costs, materials and on-site assembly times.

The architecture studio which designed the building: 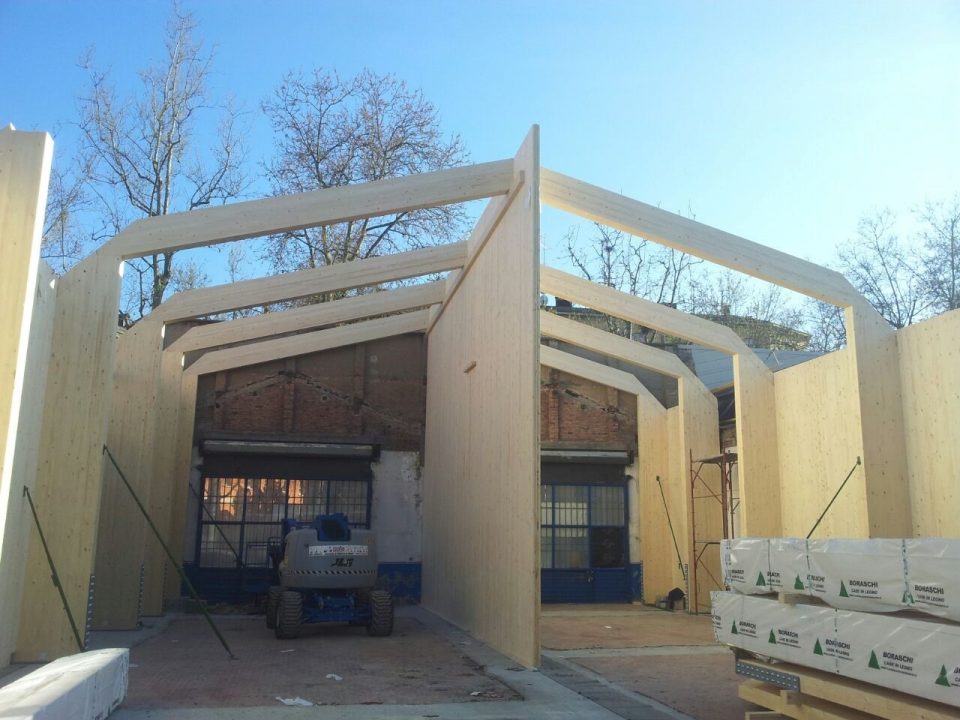